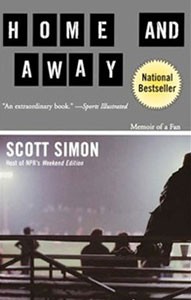 I WAS A PEE-WEE BLEACHER burn — 11 years old during the summer of 1969 when the Chicago Cubs broke my heart by blowing the pennant to the New York Mets. I grew up seven short blocks from Wrigley Field and on dozens of days each summer my mother would heed my pleas to pack me a brown bag lunch and send me off with my mitt and my friend Billy by ourselves to the ballpark. We’d arrive at about 10:00 a.m., early enough to find front-row bleacher seats for barring practice and the game, then spend the afternoon happily corrupted by the profane and profoundly unemployed beer-swilling fans who later entered baseball lore. “Over the years,” Scott Simon writes, “I have heard about as many people claim to have sat in those six rows of bleacher seats right along Waveland Avenue as claimed to have voted for John F. Kennedy.”

I was there, Scott, I swear, and you actually get some of the details wrong. There were more than six rows of “bleacher bums” (later the title of a play by Joe Mantagna) and admission was $1, not $1.75. You’re thinking of the cost of grandstand seats (See, I’m an expert on this). That extra 75 cents I saved sitting in the bleachers was enough for a cracker jack and a “frosty malt” ice cream. The bleachers also offered a better view of Ernie Banks, Billy Williams, Ferguson Jenkins and my other gods on earth. It took this book to remind me that Ernie once ran for Chicago City Council. Naturally, he lost.

It should be clear by now that although I’m only barely acquainted with the author I have no critical distance from this book. The Cubs’ only competition for my affections as a child was one Abraham Lincoln. Scott Simon’s step-father, Ralph Newman, a vivid character in this affecting tale of fathers, sons, and sports, was the owner of the legendary Abraham Lincoln bookshop, where my parents began taking me long before I could read. (Newman later was convicted for back dating some of Richard Nixon’s papers.) To make matters even more personal, my father informed me recently that the Chicago apartment vacated in the first chapter by the Simon family in 1957 (when Scott was four and I was born) was one flight up from where we lived. Chicago is a very small town.

I hope it is big enough, literally and metaphorically, to give this fine book the audience it deserves. It is about much more than the Cubs, White Sox, Bears, and Bulls. (The Black Hawks are deleted altogether). Chicago has always rivaled the American south in its production of writers, from Theodore Dreiser and Saul Bellow to Nelson Algren and Mike Royko. Simon, whose storytelling skills are well-known to listeners of National Public Radio’s “Weekend Edition,” holds his own in this league, at least most of the time. He has near-perfect pitch for the way sports and politics shaped the city from the 1960s to the 1980s; one chapter is entitled: “The Death of the Machine and the Birth of Da Bears.” In between, Simon manages to reinvigorate a full roster of unforgettable characters–from Bill Veeck to Dick Butkus to Dennis Rodman, with cameos by Jesse Jackson and Jane Byrne. The portrait of Chicago’s first black mayor, Harold Washington, is particularly deft.

It helps that Simon’s “Uncle Jack” (the best friend of his father, a comedian who died young) was Jack Brickhouse, the longtime announcer for the Cubs, White Sox, and Bears. While much of the book is mined from clips, Simon knew many of my gods personally. Cleveland Indians fans will also appreciate his salute to Rocky Colavito and his well-honed contempt for Frank Lane, the asinine GM who traded Colavito and anyone else any good (Simon’s father was briefly the Indians’ field announcer). The difference between this and the hundreds of sports books that appear each year is that Simon actually knows how to write.

In the process, he rescues many great stories from the morgue. One of my favorites is how in the mid-1970s “Papa Bear” Halas, one of the founders of the NFL, wanted to move the Bears to the suburbs. Mayor Daley called him up and said, “I think that’s fine, George. You’re a businessman. Do what you have to do. By the way, our lawyers say you can’t take the name Chicago with you out there. We’d have to take you to court. That could take years. I wonder how many people will come out to see The Arlington Heights Bears? I wonder how excited the network people will be about broadcasting The Arlington Heights Bears? You’re a fine businessman, George. You make the call.” As other franchises fled, the Bears stayed in Chicago.

Where the plight of the sports fan remains. It is now 92 years since the Cubs won the World Series. The White Sox haven’t won the pennant since 1959. Being a Cubs fan, Simon writes, is like rooting for the Italian army or raving about your Edsel. In recent years, with the help of cable TV, Cub fans have spread everywhere and the suffering is almost a character-building cliche. But Simon captures the special toll it has taken on those of us who grew up there. This makes the Chicago triumphs he recounts, from the Super Bowl Bears of William “Refrigerator” Perry in 1986 to Michael Jordan’s Bulls dynasty of the 1990s, all the sweeter.

In the summer of 1969, a black cat ran in front of the visitors dugout at Shea Stadium, jinxing Leo Durocher’s Cubs for good. Thirty seasons later, I told my eight-year-old son, living in New Jersey, that I would understand if he rooted for the Mets or Yankees. His rebuke was fast and harsh. “Don’t be a fair-weather fan, dad,” he said. “Sammy wouldn’t like it.” This fall, when the Cubs win the World Series, I’ll give him this book.