This is MORNING EDITION from NPR News. I’m Bob Edwards.

When Jackie Robinson entered major-league baseball in 1947, it wasn’t the first time America had considered integrating its national pastime. Some sportswriters and commentators had been urging it since the 1920s. NPR’s Scott Simon, author of the book “Jackie Robinson and the Integration of Baseball,” says two things happened that made Robinson’ s arrival nearly inevitable.

SCOTT SIMON (Author, “Jackie Robinson and the Integration of Baseball” ): Blacks had undeniably applied their labor, their efforts, their sweat and, yes, their blood to helping win World War II in the name of freedom. And just as the British Empire discovered they couldn’t fight the war for freedom and maintain an empire overseas, the United States discovered they couldn’t fight a war for freedom in the name of the world and maintain segregation here at home. There was also a far less ethereal question. Somebody had to beat the Yankees. The Yankees were winning year after year after year and the largest source of unscouted baseball talent were the Negro Leagues. And there was always a feeling that the baseball owner or general manager who had the nerve to bring in top Negro League stars could win a few pennants.

EDWARDS: He picked a very unusual guy and he picked him for reasons.

SIMON: You know, Robinson had the best combination of assets. There were some people that were just ruled out by the cruelty of time and age and circumstance. Satchell Paige, I think, most prominently was probably in his early 40s. Who knows? Branch Rickey thought that Satchell Paige, who was the biggest box office attraction in baseball- -we sometimes forget the highest paid baseball player in those days was not Joe DiMaggio. It was Satchell Paige, who used to joke, `Why would I want to take a pay cut to go to the major leagues?’ Rickey was also concerned about Satchell Paige, who was considered too old, Don Newcombe, who would eventually come to the Brooklyn Dodgers, because they were pitchers. Pitcher has to throw the bean ball, particularly in those days. Rickey was concerned about the possibility of something happening on the field that obviously could lead to violence, that could undo what he wanted to do by integrating baseball.

Robinson had been the best college athlete in the country, and I think not the least of it is after Rickey met Jackie Robinson. He could have signed Don Newcombe and Roy Campanella and Robinson at more or less the same time. He could have brought them onto the team at more or less the same time. But Rickey was convinced that the team would rally behind a single African-American ballplayer who would have the nerve and the gumption to stand the gaff. And that’s when he anointed Jackie Robinson kind of his knight to ride out in front of everyone else.

EDWARDS: They had a little talk.

SIMON: They did have a l–it’s a wonderful scene. Rickey had sent Clyde Sukeforth, his great coach, out to scout the Negro Leagues and he kept coming back to Jackie Robinson. And Clyde Sukeforth describes how the two of them met for the first time in Rickey’s office and they took each other in. Fifteen, 30 seconds, a whole minute, the two of them just stared at each other and then they began to break into a laugh. And Clyde Sukeforth said, `Oh, what a pair those two were.’ And that’s when Branch Rickey said, `Jackie, I want to bring a pennant to Brooklyn and I need the ballplayers to do it. Do you think you can do it?’ And Jackie Robinson said, `Yes.’

EDWARDS: And then Rickey told him what he would be up against and demonstrated it.

SIMON: Yeah. Branch Rickey became every foul-mouthed, low-life, bigoted rube that he had ever half overheard at a sporting event. And Rickey, at this point–obviously it was in the ’60s–he got close into his face. Branch Rickey actually took a swing at Jackie Robinson and, of course, Jackie Robinson had superb reflexes and was able to get out of the way. But Branch Rickey made his point. You’re going to have to put up with this kind of talk. And Jackie Robinson said, `Well, Mr. Rickey, do you want to player who doesn’t have the guts to fight back?’ And that’s when Branch Rickey delivered his greatest line: `Jackie, I want a ballplayer with the guts not to fight back.’ And the low genius of that remark is that he took Robinson, who was one of the most intensely competitive human beings imaginable, and he made the measure of his success having the courage not to fight back.

EDWARDS: Of course, he did hear every insult. He was spiked. He was baited…

EDWARDS: …and everything else, but the thing that always gets me is playing under death threats.

SIMON: It’s interesting. As other players on the team would–I think we can fairly say, would scour the stands looking for blondes and brunettes and redheads I’m sure, it had to be on Jackie Robinson’s mind to be on the outlook for rifle barrels. It was…

EDWARDS: And try playing your best game under those circumstances.

SIMON: Absolutely. It’s unimaginable trying to play under that kind of pressure, I think, the pressure of all those elements. Also knowing that your performance was being measured and was supposed to be a great step forward for everybody else with the dark skin that you were supposed to represent on that field.

EDWARDS: And success was important because what if the experiment had failed?

EDWARDS: He, of course, went on to make rookie of the year, led his team into the World Series.

EDWARDS: But what if he had stunk?

SIMON: I think if he had not made the Dodgers, there was so many talented African-American ballplayers, I think–you know, and in fact, half a dozen of them were signed by the end of the 1947 season and then Satchell Paige, of course, came to the Cleveland Indians in 1948. I think the breakthrough would have occurred. But because it occurred in the spectacular and dramatic way in which it did, I think what we had was a signal moment in American history. I really have come to believe that when people in the civil rights movement marched across the Edmund Pettus Bridge, marched through the streets of Birmingham, slowly, purposefully and faced down water cannons and batons and snarling police dogs, they had in their mind that singular image of Jackie Robinson slowly, purposely, courageously moving across from the on-deck circle into the batter’s box. He became the emblem of bearing up under great pressure and extraordinary circumstances for millions of Americans.

EDWARDS: Five years ago there were ceremonies in every ballpark to mark the 50th anniversary of baseball’s integration.

EDWARDS: And it was astonishing how many young players in the major leagues…

EDWARDS: …knew nothing of this.

SIMON: Something of an outrage that anybody playing the game of baseball professionally–black, white, Latin–would have only scant knowledge about Jackie Robinson. I think that’s one of the reasons, obviously, why they retired his number, 42, from every major-league team at this point. Jackie Robinson not only changed the game of baseball, he changed the country that nourishes baseball. I mean, the fact that Jackie Robinson made the breakthrough in baseball when he did is, I think, directly attributable to the fact that the US military was integrated within a year thereafter. Because everybody who said, `Well, you know, it’s not going to work if you integrate the military. These people are from different backgrounds. They can’t learn to work together in a unit. We have to worry first and last about national security,’ people could say, `What about the Brooklyn Dodgers? They’ re a first place club. They work pretty well and they’re integrated.’

EDWARDS: I think his post-baseball life is fascinating.

EDWARDS: You couldn’t predict which way he was going to go…

EDWARDS: …politically or even in terms of civil rights.

SIMON: Well, you know, it’s interesting because he had been–and I think if there’s an aspect of Jackie Robinson’s life at this point that is unappreciated, it’s the fact that he was a jock. This was a guy who picked up a Ping-Pong paddle ’cause he thought it was funny looking at the age of 15. And a few months later won the Pasadena City Ping-Pong championship. He was a jock. He was a thoughtful man, but I think most of his thoughtfulness was to become manifest later. He became a political oracle for a lot of people and always his own man. He was a Republican. He had public but respectful quarrels with both Paul Robeson and Malcolm X. He thought that Paul Robeson was a thoughtful man who was naive about the crimes of Stalinist Soviet Russia. And he thought that Malcolm X was a talented and accomplished man, but he said something like, `You mouth a brave and bitter talk, Malcolm, but I would have more respect for you if you were suffering with Dr. King down there in Alabama and Mississippi, rather than from the relative safety of here in Harlem.’ He was absolutely an independent and original mind. He understood how important his achievement had been to people all over the country really and he took time to think through positions and try and embody them with the American public.

EDWARDS: Scott Simon is the host of NPR’s “Weekend Edition Saturday” and author of “Jackie Robinson and the Integration of Baseball.” An excerpt of the book is at npr.org.

It’s 11 minutes before the hour. 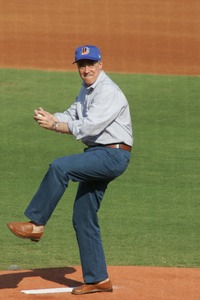