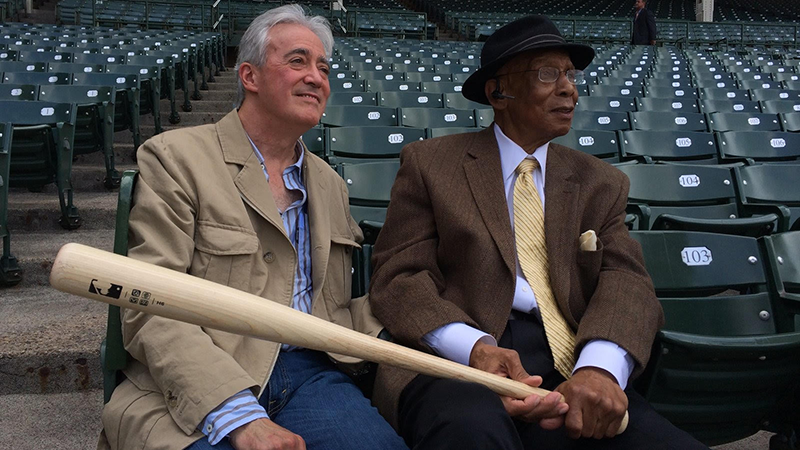 Chicago Cub Ernie Banks, right, told NPR’s Scott Simon, left, in 2014 that he had a lot of fun winning games, but the main thing in his life was “making friends.”

Listen to the commentary

Every Saturday just before our show begins I get on the public address system here to announce to our crew, “It’s a beautiful day for a radio show. Let’s do two today!”

It’s an admiring imitation of Ernie Banks, the Chicago Cubs Hall of Fame baseball player who died last night at the age of 83. Ernie used to say, especially in the long years of hot summers — including this last one, when the Cubs were stuck in last place — “It’s a beautiful day for a ballgame. Let’s play two today!”

It became his signature line. People on the street people would ask for it, the way kids at a concert call out for Bruce Springsteen to sing “Born in the U.S.A.”, and he’d oblige. “Let’s play two! Let’s play two!” It was a phrase he used to remind himself and other players that whatever their complaints, they got to play a game for a living, and hear the cheers of strangers. It was a reminder to all of us to cherish life and the chance to have work that gives enjoyment to others.

Ernie Banks had to hang his uniform on a nail when he began to play ball with the Kansas City Monarchs of the old Negro Leagues in 1950. In 2013, the president of the United States, an African-American man from his hometown, hung the Presidential Medal of Freedom around his neck.

Leo Durocher, the old player and manager who had famously groused, “Nice guys finish last,” and was more noted for epithets than compliments, said, “Banks is the one nice guy who finished first — but he had the talent to go with it.”

It was that talent — the almost feline-slender wrists that could snap a baseball bat like a whip — and his lifelong stats that got him into the Hall of Fame. Ernie Banks hit 512 home runs. He was twice the Most Valuable Player in the National League, but over the years of playing with a team that became best-known as a punchline for losing, it was another stat by which he became known: No man ever played more games without ever getting into a championship game.

I got to interview Ernie Banks a few times over the years: as a young reporter, for a couple of books, and on this show. He was unfailingly gracious. But he also plainly enjoyed being Ernie Banks for people. He enjoyed seeing the smiles he could bring to children’s faces, and the way he could make middle-aged people light up like children when they saw him.

Ernie Banks was a big star. But he was also baseball’s sunshine.