If You Love Him On NPR, Now……Scott Simon’s first novel honors humanity under siege 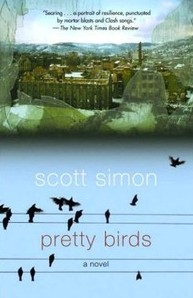 As dawn breaks, a teenage girl sits on a roof chewing gum. She’s not waiting to meet her boyfriend; she’s a Bosnian sniper trying to choose a target. It’s November 1992, and Sarajevo has been under siege for seven months. Irena Zaric, high school basketball star, has one more bullet to place before she can head back to her dead grandmother’s apartment.

As a sniper, “Irena observed certain rules…. Tedic, her chief, had told her not to shoot at children. The morals were dubious and the publicity devastating. On her own, Irena had determined that she would not shoot at pets.” She has also declared off-limits anyone who looks like Sting; Diana, princess of Wales; or figure skater Katarina Witt.

“Pretty Birds,” the first novel by National Public Radio’s Scott Simon, is an example of what can go right when a journalist turns novelist. Simon, a Peabody winner who covered the Bosnian war, loads the book with a specificity that comes from a seasoned reportorial eye – from radio broadcasts by a Serbian shock jock who makes Howard Stern sound like Captain Kangaroo, to Kolo, a bear starving in the Sarajevo Zoo.

Simon matter-of-factly details the brutality that accompanies the siege. In the space of one evening, Irena is raped, her father assaulted, her grandmother killed. Her family is robbed of their home and their possessions – except their beloved parrot. Pretty Bird learns to imitate the sounds of mortar fire but can’t learn to live without birdseed, which is harder to find than caviar in the beleaguered city.

Irena’s transformation from high-schooler into sniper comes at the hands of former vice principal Miro Tedic. He gets her a job at a brewery that serves as a front for Bosnian freedom fighters, since the United Nations frowns on their efforts to obtain guns.

“The world rebukes us. ‘Stop killing each other,’ they say. Or they lecture us. ‘It’s more awful in Africa.’ As if they care about Africa,” Tedic tells Irena, in one of the few scenes that seem a little too staged.

The book crackles with the black humor with which Sarajevans armed themselves to endure the longest siege in modern warfare – 46 months that left 12,000 people dead and some 50,000 wounded. Simon, who has a real ear for dialogue, fills his pages with affection and admiration for the Bosnian people.

Isolationists and UN employees probably won’t cheer “Pretty Birds.” Most of Simon’s fury is expended on the willingness of the UN and the West to stand by and tut fruitlessly as the ethnic cleansing went on. He ends with a quote from former Serbian President Slobodan Milosevic to Bosnian President Alija Izetbegovic at the 1995 Dayton peace accords: “You may keep Sarajevo. You have earned it.”

And no matter what a reader’s geopolitical leanings, how they earned it remains a riveting – and heartbreaking – tale.