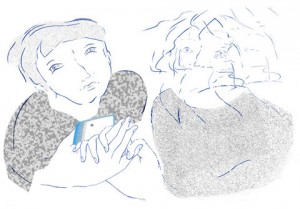 My mother finally closed her eyes amid the grim bleats of the intensive care unit for a little sleep. I slipped my hand from hers and sat back. I picked up my phone to call my wife but saw it was 3 in the morning. I looked at emails, but didn’t really read them. Then I remembered something my mother had said a couple of hours before, as we knew our time together was winding down. It had made me smile; and now I sent out a tweet:

“Mother: I don’t know why this is going on so long. I’m late for everything I guess.”

I had flown across the country to join her in Chicago because my mother was 84 and in the hospital with some dark, undiagnosed splotch in her one good lung. Patricia Lyons Simon Newman Gelbin (three marriages produced what she called, with a practiced blush, “my railroad car of a name”) wasn’t a princess, a rock singer or a movie star. Instead she became something of a star on Twitter that summer two years ago, as I posted 140-character messages about what turned out to be the last days of her life.

The audience of my followers was at 1.2 million then, but the number of people watching seemed to grow beyond that too, as news outlets around the world, from the “Today” show to the BBC to an Australian paper, took note. They saw a media platform often ridiculed as mass communication for kvetching and cat pictures become a place to read the real-life drama of a mother and son laughing and holding on as they said goodbye.

My mother knew how to put on a show, old or new media. She had been a working Chicago showgirl, who had shown mobsters to their nightclub tables, sold clothes in posh shops, and had the cool hands you’d see in ads for down-market soft drinks and bristly blue toilet bowl scrubbers (the term for this kind of modeling, alas, is hand jobs). My mother was not a shrinking violet. She thrived in front of an audience. And during the week of her last show, which I chronicled in quick bursts from her bedside, she made thousands of strangers smile, weep and remember.

“Believe me,” she said after a wave of pain had made her shudder and tear. “All those great deathbed speeches had to have been written in advance.”

As hours of agony and exhaustion stretched on, my mother struggled for a few moments of sleep. We listened to Nat King Cole, “Fiorello!” “Camelot” and Frank Sinatra — but still no sleep.
“Maybe we should listen to opera,” my mother suggested. “I always slept when I went.”

And at one point she recounted some of the indignities of old age and said young people didn’t realize how people in their 80s had earned an incomparable point of view:

“We’ve gone to bed every night since our 70s thinking, ‘Maybe I won’t wake up,’” she said. “That’s why it’s hard to sleep. That’s why we’re cranky and impatient. But we go to sleep anyway because we’ve learned what’s really important in life. That’s why people should talk to us.”

During that week, my world shrank to the confines of my mother’s hospital room. But that world was not confining. As my mother’s life wound down, she felt an urgency to pass on memories and insights with the honed perspective of someone who had seen a lot of life, and had now begun to see through whatever door opens to whatever is next. My mother showed us how to bow out of this life, which is something all of us would be blessed to live to do.

I suppose I could have kept all this to myself. But there’s a reason I went into broadcasting, not espionage. I am grateful when I can pass on something to others. Tweeting let me do that as we lived through it.

I’m sure I also tweeted because I was lonely. Grave illnesses have long stretches of stupor and tedium. Until the very end, my wife and children were two time zones away, and I was too anxious and exhausted for prolonged conversation anyway. But I had enough energy for a tweet. The 140 characters I thumbed out on my iPhone gave me the distance and focus to help me mark the hours and try to explore and express my emotions, to myself and for others. And those tweets we read in return — “Look, Mother, a man in Ireland says he’s praying for you; a woman in the Yukon says you make her laugh” — widened our world. They gave my mother encouragement, comfort and what amounted to a digital ovation.

I used to refuse to write condolences by email when the loved one of a friend died. It seemed brusque. Now people tell us someone has died on their Facebook page or Twitter feed, and I try to reply immediately. Friends welcome and even expect our expressions of comfort instantly.

A platform like Twitter is as serious or superficial as we make it. On any given day, my personal feed veers between presidential announcements, pollen counts, words from Pope Francis and @SheilaDowningRN, a nurse in Philadelphia, New York Times (and Post) columns, articles from Haaretz and The Onion, wry remarks from @badbanana, @LibyaLiberty, dispatches from people under siege in Syria and photos from Uncle Sheldon’s birthday. It is a medium where people share life and death stories.

I got thousands of messages in the months that followed my mother’s death from people who said they had been amused and moved by what they read in the tweets I sent from her hospital room. I also heard from a few who said they had squirmed to read them, that I had violated my mother’s privacy, or who seemed to resent all the attention to her death.

This puzzled me. Tweets are not compulsory reading. I didn’t pass on intimate medical details, or rattle family skeletons. And I never suggested — my mother would have insisted on this — that her death was a tragedy. She lived a long, full, fascinating life, and died with her son by her side. I posted messages in which I admitted some of my anxieties and shared some of my mother’s wit and spirit as we went through an intense experience that, one way or another, we will all have.

I don’t confuse Facebook friends or Twitter followers — some of whom are following me because of my work — with old friends from my childhood, or close friends with whom I covered wars. But one of the ways we use social media is to make statements and mark moments in our human story. In a way, a Twitter feed can be the 21st-century equivalent of a papyrus scroll or a folk ballad: scraps of our lives that we share with the larger world. Life-changing experiences can move us to pass along what we believe we’ve learned. We want to shout about a birth into the heavens. We want to place the face of someone we’ve lost in the stars. We want people to know. Social media has become the first line of our utterly human response.

Scott Simon is the host of NPR’s “Weekend Edition Saturday” and the author of “Unforgettable: A Son, a Mother, and the Lessons of a Lifetime,” from which this essay is adapted.