There’s a lot of hand-wringing these days about the importance of having The Talk — not the one parents have with their mortified tweens, but the one we shy from having with aging parents or those terminally ill. The one about death and dying.

Scott Simon, host of NPR’s “Weekend Edition Saturday,” proves to be an able guide to the art of saying goodbye in his deeply affecting new memoir, “Unforgettable: A Son, a Mother, and the Lessons of a Lifetime.” (Excerpt: Read Chapter 1.)

Mr. Simon’s conversation — with his mother and with the public — began as a series of tweets in the summer of 2013. At the outset of his mother’s stay in a Chicago intensive care unit, Mr. Simon tapped to his 1.2 million Twitter followers: “Mother called: ‘I can’t talk. I’m surrounded by handsome men.’ Emergency surgery. If you can hold a thought for her now.”

Over the next few days, as it became clear that his 84-year-old mother was dying of lung cancer, Mr. Simon’s tweets provided his followers with a bedside seat to a mutual farewell. Their conversations were emotional and entertaining, often instructive. A thrice-married former showgirl, Patricia Lyons Simon Newman Gelbin (“a railroad train of a name,” she called it) knew how to keep an audience enthralled even as life slipped away. 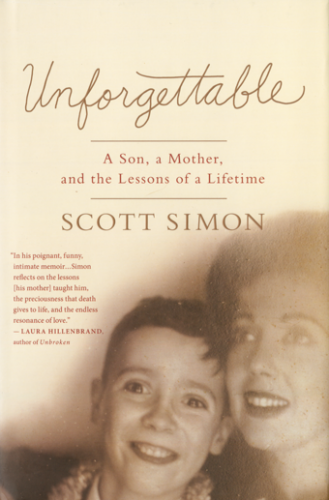 Mr. Simon and his mother laughed through the final days, once so hard his mother blew out a nasal tube. Believe me, those two were meant for the stage, not a hospital ward.

“Like two old comics, we didn’t need to reach the punch lines to laugh,” he writes. But soon enough — by the third hospital-room rendition of “Que Sera, Sera” — it’s obvious they are focusing on what is, knowing all too well what will be.

There are moments when Mr. Simon uncharacteristically fumbles. He tweets: “Mother: ‘Do you think we’ll get out of this?’” With no response from Mr. Simon, she answers her own question: “I guess I will get out of this. One way or another.”

Mr. Simon may not have realized that he was joining a national conversation about death and dying. But many of his listeners and followers praised him for sharing his mother’s death via social media; the memoirist Meghan O’Rourke later suggested he had created “a kind of public space” for mourning.

Not everyone approved of using a public space for such intimate depictions of illness and death. Many suggested the posts had violated his mother’s privacy. “My mother was not a shrinking violet,” Mr. Simon writes. “She knew she was giving us great material. I don’t believe anything I wrote, then or now, violates her privacy.”

In the past two years, other end-of-life advocates have joined Mr. Simon in using social media to make their cases. Brittany Maynard, who received a diagnosis of terminal brain cancer, spent her last months creating a series of heartbreaking but instructive YouTube videos to jump-start the end-of-life choice movement.

Lisa Bonchek Adams, who died from breast cancer earlier this year, blogged and tweeted thousands of times about her illness. Partly as a result of efforts like hers, five states now permit terminally ill patients to choose how and when to end their lives.

“Social media is giving people a socially acceptable place to talk about death, and somebody with a voice who is respected and heard is giving people permission to talk about something that’s socially taboo,” wrote Carla Sofka, an editor of “Dying, Death, and Grief in an Online Universe,” who credits these developments with opening up a much-needed conversation.

But “Unforgettable” also holds larger lessons about how to approach this challenging chapter in life, which – damn it! — feels new no matter how many times we are faced with loss. (I’m finding Mr. Simon’s cocktail of humor, honesty and compassion a powerful tonic in helping with my 83-year-old mother, who like Mrs. Gelbin has lung cancer.)

First among them is simply to talk, to acknowledge the imminence of death and the sadness of loss. The call for honesty, while not new, is liberating, especially in Mr. Simon’s empathetic voice. The dying should have the chance to accept their own passing, and those of us at the bedside deserve our farewells, too.

Mr. Simon movingly describes sliding into bed next to his mother, slipping an arm around her shoulder and putting his hand over hers. She cried out, “Help. Me!” a plea for assistance getting to “what was beyond.”

After Mrs. Gelbin died came her son’s final tweets. “My mother died and I mourned,” writes Mr. Simon. “That’s as much a part of life as love and taxes. Why be quiet about it?”

If not being quiet about death is becoming the new normal, then Mr. Simon’s “Unforgettable” is one of its cornerstones.

Steven Petrow writes frequently about manners in the digital age.