After tweeting his mother’s death, NPR’s Scott Simon has written the book of her life 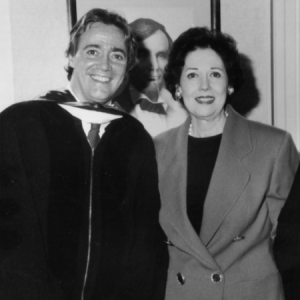 When Scott Simon began tweeting pain, love and conversation from his mother’s deathbed in an intensive-care unit in July 2013, he turned personal grief into collective emotion. Sharing painful moments and insights — “I just realized: she once had to let me go into the big wide world. Now I have to let her go the same way” — Simon broke ground in the uses of social media. He was alone with his mother for most of those days at the hospital. Yet millions sat vigil with him, sobbing and laughing at the life and wisdom of 84-year-old Patricia Lyons Simon Newman.

Now, with “Unforgettable,” Simon reveals not the possibilities of social media but its limits. However intimate those 140-character bursts, they seem inadequate compared with the skilled unspooling of this memoir about growing up alongside his mother in their beloved Chicago and of caring for her in the final breaths.

Simon, host of NPR’s “Weekend Edition Saturday,” has not just filled in the story — he has told a new one. His tweets were about a son’s love for his mother in the face of inevitable death; his book is about a mother’s love for her son in the face of unavoidable loneliness.

“My mother was glamorous,” Simon explains. She modeled for hairspray and Chevys; she worked in nightclubs and dated mobsters; she sold clothes at upscale Michigan Avenue shops; she was an ad agency receptionist in the “Mad Men” era. At the same time, “my mother was a working girl,” he writes. She was divorced and single; she and Simon shared a cramped one-bedroom apartment; she skipped meals for herself so she could make the rent, give her boy plenty of snacks and throw him James Bond-themed birthday parties.

She did it on her own because her former husband, Simon’s father, had been a comedian intent on drinking himself to death. They had a “breathless, reckless kind of romantic kamikaze love,”Simon recalls, but there had come a moment when Patti had to leave, and take Scott, if they were to survive. “It’s one thing to fall in love with someone who drinks,” Patti told her son, “and another thing to wake up with him, day after day.” Instead, she filled their lives with truly great friends and mostly good men. Long stretches of “Unforgettable” show Simon and his mother reminiscing about them.

Patti’s female friends — Simon’s “aunties” — were hostesses, dancers, lounge singers, women linked by their “mistakes, good times, lonely nights, and hard-won laughs.” Simon recalls the sights, sounds and smells of their impromptu parties: “evenings with lots of snorts and laughs, olives and cheddar cheese on rye crackers, the stroke of matches, the tinkle of ice, compact makeup mirrors folded with a snap, high heels under the coffee table, crinkled cocktail napkins with lipstick smudges, earrings pulled out and resting on a coaster, Tony Bennett on the turntable.”

These women taught him to be a “classy guy” — perhaps because they’d suffered more than a few classless ones. “They passed what they learned on to me,” Simon writes. “They gave me something to steer toward.”

Patti married twice more, an Irish mother with three Jewish husbands. After Simon’s father died came a Lincoln scholar, whom she outlived, and a retired furniture executive, whom she did not. In between, Patti attracted plenty of attention. “For most of my boyhood,” Simon recalls, “my mother was unmarried, pretty, funny, and popular.” A wiseass boy still loyal to his father, he did his best to unsettle Patti’s boyfriends. “Lovely, weren’t they?” Patti says. “They sure were,” Simon answers simply.

And many were. But Simon also recalls a muffled argument in their living room, a slamming front door and his mother entering his room. “ ‘I don’t think we’ll see Bill anytime soon,’ she said, and in her sigh and the silence that followed I finally heard that my mother was lonely.” The loneliness peaked when Patti fell in love with a married man who came to their home Thursday evenings and slipped Simon some cash to go to the movies. One night, Simon returned to find his mother, semi-conscious, alongside an empty bottle of sleeping pills and a note by the phone.

In the ICU decades later, Simon asks about the suicide attempt. “I guess I was desperate,” Patti says. “Desperate. I told Phillip we couldn’t go on. But he kept coming back. And I kept taking him back. I felt I had to do something to remind us that we were playing with fire.”

Simon didn’t call an ambulance that night. Instead, he dialed the doctor who provided Phillip’s weekly alibi (a supposed card game). Simon didn’t want his mother humiliated. “Wordlessly, we kept each other’s secrets,” he writes. “We were mother and son. We knew where to hurt each other and how to protect each other.”

Trying to protect her at the end, Simon battles the absurdities of modern health care. When Patti is first hospitalized, they struggle to get answers. “I walk in for a blood test, and I wind up like this,” she complains. “People stick pins into me, and put a tube in my chest, and never tell me what’s going on.” Only when the palliative care team “circles the bed,” Simon writes, do he and his mother realize there are no answers they would want to hear.

Simon dedicates the book to “those kind, loving souls in hospitals who do so much for those we love,” but he has only certain souls in mind. “There was a difference between the care my mother got, hour to hour, from nurses and technicians, who were invariably considerate, gentle, and selfless,” he writes, “and that of most of her doctors, who were . . . invisible.”

Those doctors huddle over laptops in hallways, rarely speaking to Patti. Simon clashes with a chronically absent pulmonologist, learns late that earlier radiation treatments could have weakened his mother’s lungs and loses it when doctors wait too patiently for medications from the hospital pharmacy. “I don’t know why everyone is so reluctant to talk to the pharmacist,” he snaps at the young residents. “I talk to powerful people for a living. Should I go down there?”

Anyone who has watched a loved one ebb away, surrounded by blinks and beeps, recognizes the indignity, solemnity and tedium. As the hours pass, Patti and Simon debate the Catholic Church, sing Broadway duets and dissect “Casablanca” (Patti insists that Ilsa loved Victor, not Rick). But then, at one moment, Patti thinks she sees her own mother beckoning. She closes her eyes and tries to will herself across, until she opens them again and sinks into her pillow. “Oh hell,” she says. “My mother never helped me anyway.”

True. Years earlier, Patti’s mother, trapped in a spiritless marriage, killed herself. Simon, his father and his mother found her with two empty bottles, one the morning Scotch, the other sleeping pills. “She left me all alone,” Patti says. “With a little boy and a husband drinking himself to death.” That’s not her only legacy. “Suicide puts a fly in your head,” Patti realizes. “It’s always buzzing around.”

This book is about family secrets revealed — not because they don’t matter anymore, but because a moment arrives when they’re all that matter and secrecy no longer does.

As Patti slips her bonds, she speaks out: “Help. Me.” Simon leaps from his mat. “In that horrifying and exquisite moment, I held my mother as I have held my children. I tried to look without blinking into her bottomless brown eyes. I told her, ‘I’m here. Look at me. Give me everything. Every fear, every pain. Leave them with me. I’m your son.’ ”

This is not when you first feel a hot, thick tightness rising in your throat. It is when you realize that the tears have been flowing for some time, easing your way through a book that easily matches its title.