Remarks on Accepting The Order of Lincoln

Scott Simon’s Remarks on Accepting The Order of Lincoln 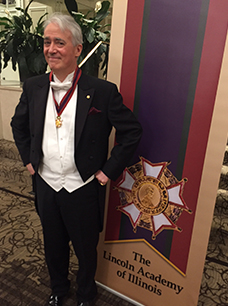 Thank you. This is the greatest honor I have received—since my wife and children came into my life.

I hold special thoughts in my heart today for my mother, Patricia Lyons Simon Newman Gelbin, who gave so much joy to those who knew her, and many more who have read about her.

And for my father, Ernie Simon, who was drawn to this state because it is such a lodestar of comedy and entertainment.

And for my stepfather, Ralph Newman, who opened the Abraham Lincoln Bookshop, and did so much to make Abe Lincoln manifest in our lives.

As Mr. Lincoln once said, “Their prayers cling to me.”

My wife, Caroline, and our daughters, Elise and Paulina are here in Peoria. Our daughters carry the cultures of China, where they were born, and France, from their mother, and of course America in their lives. But as they grow up, wherever they land in the world, I hope they will treasure the traits of Illinois that are also their inheritance.

Our oldest daughter, Elise, has just turned thirteen. Twelve years and a month ago, we came through Homeland Security at O’ Hare from China. We found ourselves sitting alongside families from Korea, Kenya, El Salvado, Ireland, Poland, and a score of other places, each waiting to enter the United States in the place that is both this country’s most American and international of cities.

The security officer in a broad-brimmed hat called our name: Simon Family. He looked through our paperwork, stamped each sheet, and then pointed to a white line about twenty feet ahead.

“When your little girl crosses that line,” he said, “she’s a citizen of the United States.”

And then he put his huge hand lightly below our daughter’s small chin and told her, “Welcome home, sweetheart.”

To our family, that is the motto and message of Illinois.

To be from Illinois is to carry a stamp through our lives. It is to know that somewhere in our souls we are touched by:
The unbounded openness of the prairie;
The grit and glamour of Chicago;
The emblematic history of Peoria, Springfield, Alton, Collinsville, and Galesburg;
The plainsong poetics of Sandburg, Gwendolyn Brooks, Bellow, Hemingway, and Aleksander Hemon;
Some of the soaring style of Frank Lloyd Wright, Helmut Jahn, and Michael Jordan.
The dramatics of Nichols and May, The Second City, Steppenwolf, and David Mamet;
And I hope some of the sturdiness of Lincoln, Lovejoy, Grant, Mother Frances Cabrini, Stevenson, Jane Addams, Altgeld, Jesse Jackson, Everett Dirksen, and Barack Obama.

I hope you will allow a loving son of Illinois to also offer a note of urgency.

In many ways, this state we cherish has never been more accomplished in art, culture, and commerce. But the violence and murders in neighborhoods of our largest city not only stains the name of Illinois. It is the loss of our lifeblood: of men, women, and children who are part of the wealth of our humanity. And for each life lost, an incalculable number of more lives are crippled with fear and desperation.

The lives being taken from our state every day are those of our sons and daughters. We owe them the full measure of the genius, strength, and determination of this extraordinary state that we so cherish to try to bring peace to their lives.