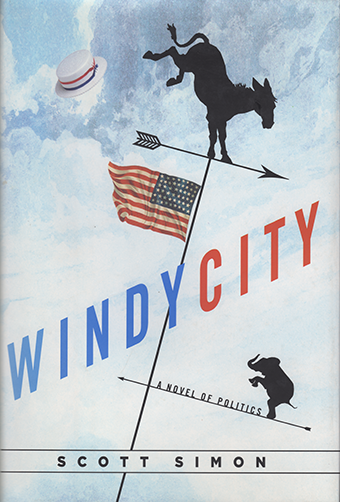 In this novel, Scott Simon now gives us a story that is both laugh-out loud funny and heart piercing: as sprawling, brawling, and funny as Chicago, where politics is a contact sport.Windy City is a rollercoaster of a novel that dips and soars through the amusement park of politics. It will win votes as the best political novel in many years. Its personal story — about a flawed, decent man thrust suddenly under hot lights — will also win hearts.

Windy City is funny and tender, filled with characters that capture the lure and fray of politics, and full of boisterous love for the sport of politics and Chicago. The best political novel in years.

Christopher Buckley, author of Thank You for Smoking, Florence of Arabia, and Boomsday.

Comic but sneakily affecting…The rich multiculturalism of the American city is not a new phenomenon…rarely, however, has it been depicted with such unabashed affection…the zeal with which he celebrates the city, warts and all, is hard to resist…Simon’s choice of hero…is an immensely appealing figure.

A hilarious satirical novel about politics.

For Chicago lovers and city-politics fiends, this novel is a must-read.   For everyone else, the book offers an insider’s view of the kind of urban political fray — albeit fictional — that Barack Obama emerged from as an Illinois state legislator representing Chicago’s South Side.

[A] great novel…filled with emotional turmoil, gritty political decisions, murders, homicide attempts, a suicide and even a touch of romance… [a] human and fully realized portrait of the people caught up in contemporary public life.

Entertaining and well-observed…renders the inner workings of City Hall with wit and aplomb…some of Simon’s chicagoans may be con artists, crooks, amoral opportunists or blowhards, sometimes all of the above, but the author still treats them with great affection and respect, creating an impressively large and divers cast of characters.

Pitch perfect…Scott Simon…knows his way around politics…His dialogue throws off sparks and shrieks like a Chicago El-car…Recommended to all political junkies.