Interviews: Baby We Were Meant

‘Meant For Each Other’: Scott Simon’s Adoption Story 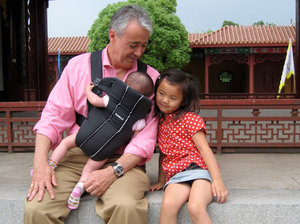 
Listen to Scott Simon’s Interview with NPR’s Steve Inskeep
Scott Simon, host of NPR’s Weekend Edition, remembers the moment he and his wife decided to adopt.

“We’d both been in places where there are a lot of children who’d been abandoned,” he tells NPR’s Steve Inskeep. “We just looked at each other and said, ‘Why are we doing this? There are children in the world now who need our love, and we sure need them.'”

In his new book, Baby, We Were Meant for Each Other, Simon shares the journey — from struggling to conceive, to deciding to adopt, to traveling halfway around the world — that ended with him and his wife, Caroline, adopting two little girls from China.

Simon says the decision to adopt changed his life — but it wasn’t easy. He explains that the adoption process in the United States is particularly taxing and can discourage many potential parents.

“It is difficult, time-consuming and expensive to adopt a child in this country,” he says. “For a lot of people, the assisted-fertility industry is just an obvious alternative to that.”

Then there’s the emotional toll that not everyone is prepared to pay. That said, Simon says he wants to help potential parents to see the natural beauty in adoption.

“I would like to open that door for people,” he says. “The instinct to adopt — to take children into our lives — is, I think, practically as old as childbirth.”

For Simon and Caroline, that instinct was so strong that it drowned out any concern they may have had about there being an ethnic barrier between them and their adopted children.

“That baby is so much more to you than its ethnicity,” he says. “First of all, they’re hungry, they’re thirsty, they’re crying, they need sleep — all of these kinds of things that have nothing to do, certainly, with ethnicity.”

And while Simon and Caroline are determined to expose their daughters to Chinese culture through history and travel, he says their ethnicity is still only a feature of their personality, not a defining trait.

But not everyone sees it that way. Simon says he was shocked when a friend asked Caroline if she felt guilty for taking her daughters away from their native culture: “My wife just answered, ‘No, not really.’ I think I would have had a tougher time holding my tongue.”

Simon says it’s best not to invest too much of one’s identity in ethnicity. In his book, he writes about the experience of Martin Simon, the adopted son of the late Illinois Sen. Paul Simon (no relation to Scott Simon).

Because Martin’s birth certificate stated that he was Native American, that ethnicity became a large part of his identity. So much so, that his high school friends described him as part Cherokee and his father even became a member of the Senate Committee on Indian Affairs. It wasn’t until later in life that Martin finally met his biological mother and discovered he wasn’t Native American at all. It turned out that Martin’s mother was a woman of Scandinavian origin who, stumped by the “ethnic” section of the adoption form, had simply identified herself as “All American.”

For Simon, the vignette is proof of the power of suggestion — but that’s a subtlety his daughters aren’t yet aware of.

At 7 years old, Simon’s daughter Elise is at an age where she’s starting to ask some pretty difficult questions — like why her biological mother gave her up — and the answers aren’t always easy for her to understand.

“We tell her, ‘Your mother loved you and she wanted to take care of you for the rest of your life and she wanted to be a mother to you but she just couldn’t,’ ” Simon says. “Yet it’s hard for a 7-year-old to understand. How do you explain China’s one-child policy?”

What’s important, he says, is that his children are comfortable with being adopted and that they know the truth about it — sad though it may be.

“There is no way that we’re going to spare them the sting and the hurt of feeling that at some point there was someone who gave them up,” he says. “We learn from hurts in life, don’t we? We put something over them and we keep on going. And I think our two daughters are going to be very strong, in part, because of that.” 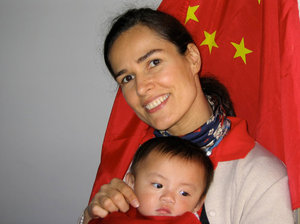 Scott Simon, the host of NPR’s Weekend Edition, became a father for the first time at the age of 50, when he and his wife, Caroline, adopted the first of their two daughters from China.

In his new book, Baby We Were Meant For Each Other, Simon describes how he and Caroline decided to adopt after struggling to conceive, and then traveled to Nanchang, China, from their home in Washington, D.C., twice — first to bring Elise home, and then five years later, when they went to pick up Elise’s little sister, Lina.

“They knocked on our door, and sat this baby down on the conference table, and she did not look like the girl in the picture [that we had received],” he says. “Now, we couldn’t have cared less, but what we didn’t want was them coming back in a couple of hours and saying, ‘Oh, there’s been some terrible mistake. You got the baby that was meant for [another] family and they got yours. Let’s make a switch right now.’ Because as soon as they brought that baby into the suite, we were falling in love with her. And I will never forget that our oldest daughter, Elise … she just reached out with her little hand, with a kind of tenderness you usually don’t see in 5-year-olds, and she said, ‘It doesn’t matter.’ ”

Simon says moments like these have made him extremely glad he became a father — and that the process of adopting his daughters has changed his life.

“I have never loved a human being or a human moment more,” he says.

Baby, We Were Meant for Each Other