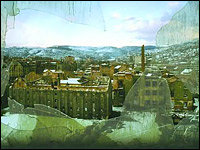 In the early 1990s, NPR journalist Scott Simon reported from war-torn Sarajevo. Those experiences formed the basis for his debut novel, Pretty Birds, the story of a 16-year-old girl who adapts to her violent times.

Offered a chance to become a sniper and take retribution against Serbs, half-Muslim Irena Zaric finds her place in the conflict. The novel tells of her complicated life in a dramatically changing city.

Scott Simon, host of NPR’s Weekend Edition Saturday, talks about his debut novel, Pretty Birds. For Simon’s first work of fiction, he drew on his experiences reporting on the war in Sarajevo in 1993. The story centers on a young Muslim woman who becomes a sniper during the height of the siege of Sarajevo in the early 1990s.