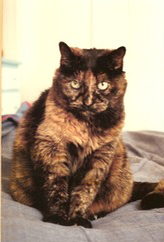 SCOTT SIMON, HOST: A few days ago, my cat Lenore died. She was 22, which is older than most of our student interns.

Lenore was already ailing, aching, and thin a few nights ago as she watched the Chicago Bulls play an exhibition game in Paris from my lap. I carried her to her food bowl, where I’d mixed some jalapeno salsa in with her beef and liver, tried to steady her on her legs.

And when she tried to lurch forward toward the salsa, her legs gave out and she collapsed. It was like seeing Mohammed Ali knocked down for the first time, my cat Lenore falling before she could reach her food.

Now over the years, a surprising number of listeners somehow learned that I had an aging Mexican cat who ate the insides of enchiladas, kept a picture of Michael Jordan by her food bowl — well, maybe I was mostly responsible for that — and had a chatty, cranky baby’s cry of a howl we put on the air for a Halloween story.

SIMON: Halloween, after all, was her birthday.

People who have pets in their lives and then hold them close as they watch them die often feel they need to remind themselves it’s an animal in our arms, not an actual human friend or family member. But inside where our bodies cannot lie to us, the ache and loss and grief we feel is absolutely real.

I’m glad I’ve gotten to the point in life where I’m not defensive about saying that I hope I’ve learned a little something from this cat, who probably had a brain the size of a small walnut but still managed to dominate our long relationship.

Because I travel a good deal, Lenore has had an extensive coterie of people who cared for her while I was gone. This week many of them have sent notes and flowers, recollecting that she was, as one phrased it, “a tough and amusing character who didn’t judge people by the gossip or reputation proceeding them, but only by the kindness in their hands.”

And then over these past few months, as Lenore began to grind down, I was impressed by her unselfconscious determination to keep going. I won’t put a human word like courage on the strength that takes an aging cat with aching limbs and wheezing lungs to walk on four halting legs down a long hallway to her food bowl. But I don’t mind saying I hope I have that plodding perseverance when I need it.

As Lenore saw it, there is just so much salsa ahead.

© Copyright 1997 NPR. All rights reserved. Weekend Edition is a service mark and may be used only with permission. No quotes from the materials contained herein may be used in any media without attribution to Weekend Edition. This transcript may not be reproduced in whole or in part without prior written permission. For further information, please contact us.